A Tribute to Bach - Classical Jazz

French jazz pianist, Jacques Loussier was captivated by Johann Sebastian Bach's music as a child after hearing a piece from the Anna Magdalena Notebook.
“I was so fascinated with the way Bach used that theme and his harmonies that I played it once, then 10 times, then 20 times...The more I played it, the more I wanted to explore it further.”
Loussier's love affair with Bach's music introduced the world to a fresh twist on the master's works, full of driving rhythms, infectious swing and filled with the magic of counterpoint.
Inspired by the imagination of Loussier, the Classical Jazz Quartet bring their own special flair and interpretation to Bach's music, through Brinson's upbeat arrangements, introducing you to the dazzling world of the baroque.
It is all set for an uplifting feel-good afternoon ahead with greats such as Bach's Toccata and Fugue, the buoyant Violin Partita no 3, the mellifluous Jesu, Joy of Man's Desiring, plus extra musical treasures from some of his baroque friends.
CJQ consists of four outstanding Christchurch musicians, friends of Christchurch Symphony Orchestra first violinist, Cathy Irons. Each a recognised musician in their own field, the four musicians revel in getting together, ignoring convention and freely crossing the boundaries of music with conviction and delight. All have extensive NZ and international experience.
Described as “sonic fireworks that dazzle with all their brilliance” and “characterized by inspirational musicianship,” the Classical Jazz Quartet bring you a concert that will keep you smiling into the weeks ahead. 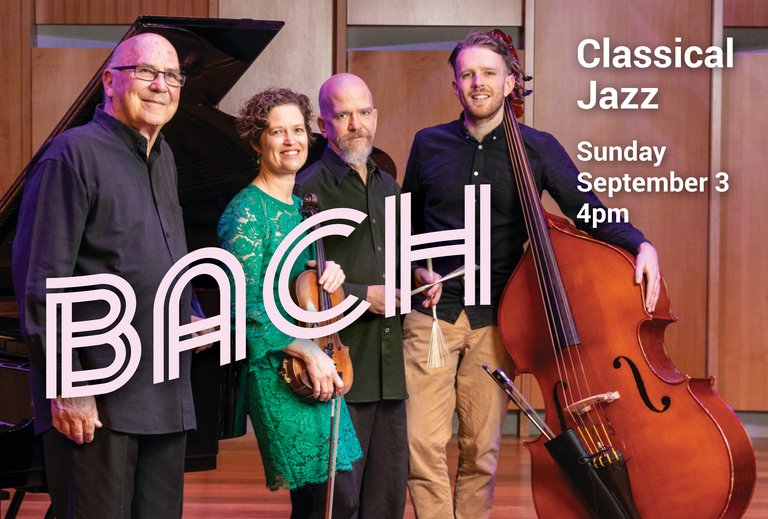